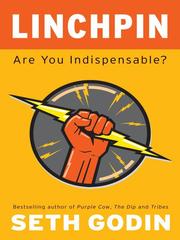 Critics say that Linchpin is Seth Godin’s most passionate book and I have to agree. First, he reveals that “there are no longer any great jobs where someone else tells you precisely what to do.” Linchpins who hold meaningful jobs don’t just follow orders. They add creativity-filled innovation and thus, create art.

Seth shows how to free people so they can become artists, which means creators of unique and compelling value. It does not matter what these individuals do for living. It’s the attitude that matters. Linchpin’s drive and passion make it possible to create art every day.

If people can become artists, “they will rise to a level you can’t even imagine. When people realize that they are not an easily replaceable commodity….they produce more than you pay them to, because you are paying them with something worth more than money …” People crave connection and respect.

As an individual, you can’t become a linchpin merely because you are different.

Linchpin is a most unusual, thought-provoking and concise book about becoming indispensable, whether you work for someone else or are self-employed. Godin’s principles can be applied to other aspects of life. Linchpins can be spouses, friends and community members. They can be indispensable in many ways.

Godin says that if you want customers to flock to you, it’s tempting to race to the bottom of the price chart. There’s plenty of room there, but the only way to win is to race to the top.

Are you indispensable? Do you create art?

I have been traveling quite a bit lately. I embrace these opportunities as there is always so much to  learn from people who live in different parts of the world – frugality and resourcefulness from citizens of countries that have to get by with much less than people in the U.S,  relaxed and easygoing attitude from a young man who lives in Brazil, efficient time management from German professionals and eloquence from British gentlemen.

I have witnessed different approaches to marketing and politics as well – pre-election Germany had a different feel than pre-election Estonia.  Overall, it looked like Europeans had taken a low key approach,
people and governments are tightening their belts.

Just like people in different countries have different needs, so do small businesses. Product and service customization as well as getting to know your customer are both equally important, or you’ll miss the mark.  We have so much to learn from each encounter with potential and current customers.

When the editors of Fortune magazine asked the CEOs of large companies to reveal the best advice they had ever been given, they received some interesting answers. Some of these replies won’t be helpful, unless you lead an enormous corporation, but some of what was said contains ideas that could influence our point of view. For example, Indra Nooyi, chairman and CEO of PepsiCo, had this to say:

“Whatever anybody says or does, assume positive intent. When you assume negative intent, you’re angry.” These were her father’s words. She says that when you take away anger and assume positive intent, you will be amazed. Nooyi says your emotional quotient will go up. You won’t get defensive. You will try to understand and listen because you are thinking, “Maybe they are saying something to me that I’m not hearing,”

Google founder Larry Page says he had about 10 things he wanted to do when he was in graduate school at Stanford. One of them was to look at link structure on the Web, a project that eventually led to Google. His advisor picked that one out for him, saying it seemed like a very good idea. Page’s experience reminds us that we are more effective when we focus on one area instead of spreading our attention over several.

New York’s Mayor Michael Bloomberg gave this advice: “Don’t react until you have had a chance to think. Ready, shoot, aim is not the smartest policy.”

War heroes, long after they pass on, live on in the movies. The life and exploits of sports heroes are retold in books. Sixty years after his death, we still know Babe Ruth.

Stars of the business world may be less well-remembered, but their daring feats qualify them as heroes just the same. Dead CEOs still have a lot to teach. In New Ideas From Dead CEOs, author Todd G. Buchholtz dramatically brings their business stories back to us.

Take A.P. Giannini, founder of Bank of America. He cared so much for his customers that he reopened his bank four days after the San Francisco earthquake of 1906. It was a Sunday. Giannini went down to the wharf, put a plank across two wooden barrels and declared himself open for business.

Some of Buchholz’s heroes started their empires from scratch. Walt Disney first supported himself by taking baby pictures. His career got a boost when he received $500 for a film on dental hygiene.

Sam Walton wasn’t shy about scoping out the competition. At one point, he sneaked around competitor’s stores and looked under the display racks to check inventory. Walton was a proud skinflint. He was so tight with a dollar that he once shared a hotel room with eight staffers. Those were the early days. By the time he became a retailing legend, he only shared his room with one staff member.

In addition to the dramas of Wal-Mart and Disney, Buchholz tells the adventures of Tom Watson Sr. and Tom Watson Jr. of IBM, Mary Kay Ash and Estee Lauder, David Sarnoff of RCA, Ray Kroc of McDonald’s, and Akio Morita, founder of Sony.

Attacking bearer of bad tidings is a mistake, poor form

It’s called “shooting the messenger”, blaming the one who delivers bad news when the bearer actually had little or no control over the situation.

It doesn’t help, but a lot of us do it anyway. Management consultants say it gives us the feeling that we’re doing something about a situation when we’re not.

Some people are easier to blame than others, like waiters, customer-service people, and anyone who has to convey bad news about an insurance claim. These people usually aren’t responsible, but they get the blame anyway.

Customer service people may have to tell a customer about a delayed shipment or a denied refund. The problem is that they may be less qualified to explain a problem than someone who is actually involved, which can make the customer more hostile than before. It’s a mistake to have someone do a job you or someone else should be doing.

You know that it’s vital to be informed about problems as soon as they become evident. If you become known for terrible reactions to bad news, it’s more likely that people will try to cover up problems or handle them however they can. But without your input and skill, the problem can fester and become worse.

Not only is it poor form to get angry with the bearer of bad news, but knowing the truth and knowing it immediately is in your best interest.

One applicant described in Fortune was part of MAGTF and developed a set of COAs to give to his CO.

To companies that have learned the lingo, military acronyms like these translate to new skilled workers. General Electric recently matched military acronyms to the corresponding codes of the 1,000 positions it wanted to fill.

Home Depot has hired over 50,000 veterans since 2004 and company officials say veterans are “adaptable, talented, highly motivated, creative, and reliable.”

How to motivate employees?  It is really simple!

Set and monitor performance objectives AS A RESULT – LET EVERYONE WIN!

Are you ready to think on your feet? According to Business 2.0 seemingly random interview questions have become a commonplace in Silicon Valley and other tech outposts.  Here are some examples:

How many golf balls can fit in a school bus?

How much should you charge to wash all the windows in Seattle?

You’re shrunk and trapped in a blender that will turn on in 60 seconds. What do you do?

–Try to unscrew the glass or use the measurement marks to climb out.

Get ready for your interviews!

Here are some jobs that might lie on the horizon:

Undoes or minimizes the indescretions people accumulate on the Web.

Cleans up nanomaterials that spread through the environment.

provides tech-enabled deception services for those wishing to disguise their activities.

Counselor who helps to wean people from excessive technology use.